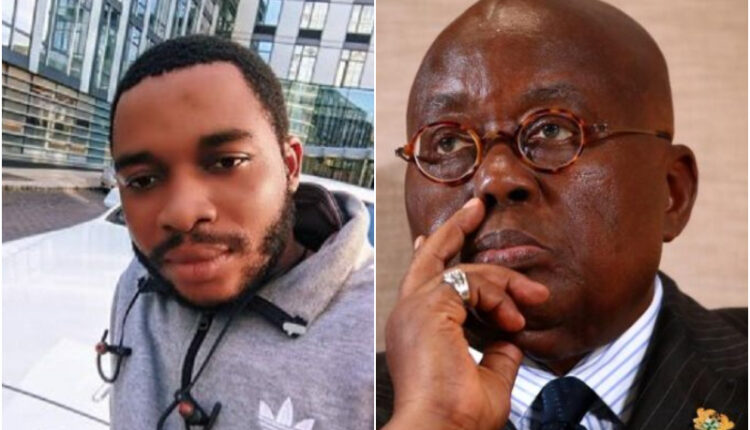 Popular Ghanaian currently staying in the USA and very vibrant on social media , Twene Jonas has once again lashed out at the President of Ghana, Nana Akufo Addo for what he describes as bad leadership and lack of foresight foresight  that has led Ghanaians into hardship and suffering .

According to him , Nana Akufo Addo was voted into power to become a watchman over Ghanaians adding that many Ghanaians have regretted voting for him .

Twene Jonas who is loud-mouthed and very abusive has further used some unprintable words against the President.

According to him , anyone who still believes in President Nana Akufo Addo who he described as stup!d , is a f00l especially as he has destroyed Ghana with his poor leadership .

He also indicated that Ghanaians are currently experiencing the highest cost of living , depreciation and the constant increment in prices of goods and services adding that the economy of Ghana is failing .

Is it true that Akufo-Addo has stated that Ghana will be the first African country to lift the FIFA World Cup after he touched it. Listen to me, if anyone still believes in that stup!d guy then you’re a F00l, after ly!ng and destroying our beloved c0untry. Highest cost of living, depreciation, increasing everything daily, etc. The system is not working in Afuommu ho! Glass Nkoaa

Over a long period of time , Twene Jonas has been very active and vocal on social media attacking the President of Ghana, Nana Akufo Addo and using very abusive words against his person due to his belief that the President has not been able to live up to expectation .

Surprisingly, no words of caution has been issued to him and no action whatsoever has been taken against him even though his attacks on the President is obvious and known all over social media .

Would the government of Ghana one of these days apprehend him and take an action against him to serve as a deterrent to others?