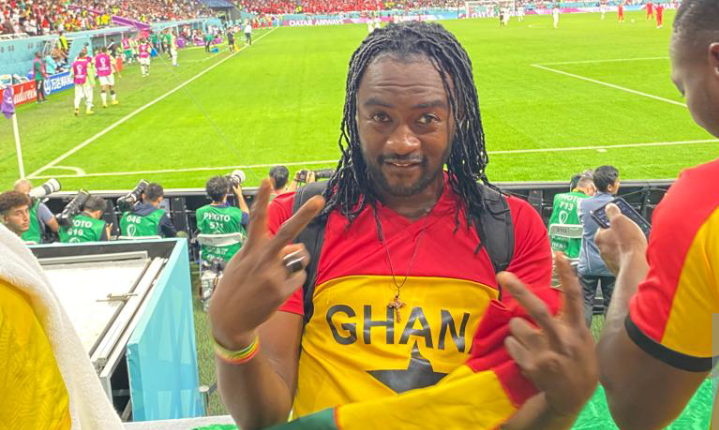 Klala, Chief Supporter of The Black Stars and Man of the Moment At Qatar 2022

In as much as the Black Stars of Ghana could not advance to the knockout stage of the ongoing Qatar 2022, one thing that is very evident is the amount of love and support that was offered to the team.

The President of Ghana, Nana Akufo Addo , some of his ministers, members of the various Supporters Union in Ghana as well as individuals travelled to Qatar to support the Black Stars in the three matches they played against Portugal,South Korea and Uruguay.

However, one personality who has shown immense commitment in his support towards the Black Stars is the Ghanaian musician, Klala.

It must be noted that it is Klala who composed ‘We are Ghana’ the official cheer song of the Black Stars.

On the basis of this same song, the Head of the Cameroun Football Association, ex-Cameroun player, Samuel Etoo visited Ghana and made time to pay a courtesy call on Klala in his humble abode.

Beyond the song composed for the Black Stars, Klala spent his time and efforts to travel to Qatar to continue supporting the Black Stars during each match.

In all the three matches, Klala was captured on the screens actively involved with the Supporters Unions to garner massive support for the Black Stars.

So far as Qatar 2022 is concerned, Klala has shown his immeasurable love towards the Black Stars in words and deed and he needs to be recommended for that.

Without any doubt, it is a step in the right direction to note that so far as love and support for the Black Stars is concerned, Klala is the Man of the Moment and no one can take that away from him.

Klala’s ‘We Are Ghana’ ;World Class Song for Black Stars At Qatar…