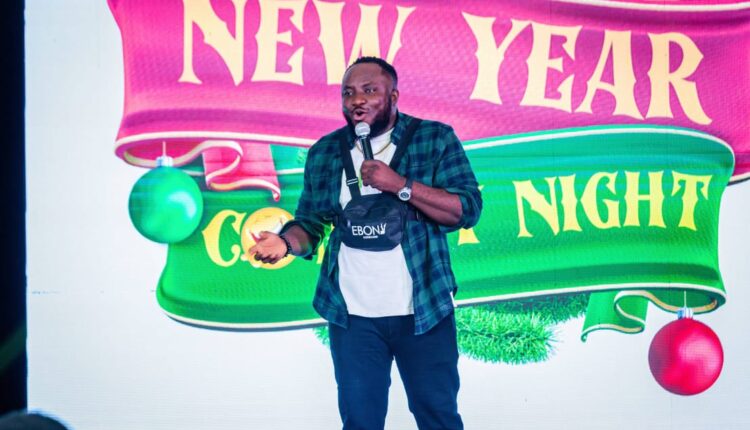 It was a fantastic night full of unforgettable events. The venue was the La Palm Royal Beach Hotel, and the atmosphere was magnificent. The New Year Comedy Night show was a major success and people who come in expecting to have a good time, had their expectations were met.

Lawyer Nti, the evening’s host, was fantastic; his ability to keep the audience engaged in between performers was exceptional. There was never a dull moment in the room because the energy he brought.

The night had fantastic music as well as comedic entertainment. Open Micers took center stage, and they each established themselves as talents to watch in the coming years. MJthecomedian, Parrot Mouth, Putogo, Lekzy DeComic, and OB Amponsah took turns amusing the audience by addressing political, religious, social, economic and personal topics.

The event’s headliner did not disappoint either. As the night’s final performance, DKB ascended the stage and put the icing on the cake. DKB examined each significant moment in the year as he looked back on the year 2022.

The night’s highlight was the honoring of Legends Augustine Abbey (Idikoko) and Ricky Kofi Kekeli Adelayitar. DKB honored them because he believes that it is better to present “flowers” to his heroes while they are still living than when they are dead and gone.

Overall, it was a fantastic night and a fantastic way to kick off the 2023 comedic event calendar.

READ ALSO:  Video: Osofo Kyiriabosom Described As A Witch Doctor Operating A Shrine And Not A Church
DKBLEKZYOB
0 40
Share FacebookTwitterGoogle+ReddItWhatsAppPinterestEmail